Cyclodextrins are natural, water soluble macrocyclic carbohydrate molecules (Fig. A1), oligomers of α-D-glucose, that possess a cavity where a plethora of hydrophobic molecules can be encapsulated. The resulting host-guest inclusion complexes exhibit many characteristics of receptor-substrate systems. The laboratory has a long experience in inclusion complexes of cyclodextrins with various guest systems:

I.     Influence of guest on the crystal packing of inclusion complexes

Packing Research on X-ray structures of β–cyclodextrin inclusion complexes with model compounds has revealed that the majority of them forms dimers, which pack in 4 major packing arrangements [1-11]. The hydrophobicity / hydrophilicity of the end groups of the guest that emerge from the primary sides of the host dimer determine the crystal packing. A characteristic example is the difference in packing between the complexes of long aliphatic mono-carboxylic acids and di-carboxylic acids (Fig. A2).

Figure A2. Inclusion of long mono-carboxylic acids (right, CH packing) and di-carboxylic acids (left, Intermediate packing) into βCD. It is suggested that it is the hydrophobic end-methyl group of the former guests at one of the primary faces of the βCD dimer, what dictates the channel formation in order to shield that part of the guest from the surrounding water molecules. The carboxylic end-group of the guest is found entrapped inside the channel at the other primary face. However, two carboxylic groups from neighboring layers self-associate and form carboxylic dimers, thus stabilizing the whole system. In the case of dicarboxylic acid guests, the end-carboxylic groups are exposed and interact with water molecules.

Of course, all rules have exceptions. Thus flexibility on the part of the guest [1,2-bis(4-aminophenyl)­ethane] that acquires two different conformations in the cavity of the βCD dimer (Fig. A3), results in a packing arrangement different that the four defined above, which however, can be transformed approximately to one of them, the screw channel mode of packing [12 and references therein]. 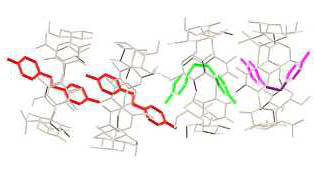 Another guest, 4-pyridinealdazine,  that has the tendency to form π-π dimers on the one hand, and H-bonds with water molecules on the other, is encapsulated into βCD with the accompanying water molecules and forms βCD trimers (Fig. A4), detected for the first time [13], with host / guest ratio 3:2, a highly unusual stoichiometry.

Non-bonding interactions, H-bonding and organization of CD supramolecular systems in the crystalline state and in aqueous solution have been extensively studied [14-18], as in the following cases where the organisation is due to the guest (Fig. A5 and A6) .

Fig. A5. With guests 1 – 4, organization of cyclodextrins in dimers has been detected in aqueous solutions [14].

Fig A6. Exothermic rotaxanation of Congo red in γCD and endothermic dimerization of the complex [16].

On the other hand, anionic cyclodextrins (in the form of triethyl­ammonium salts) interact with the picrate salt of a positively charged CD to form stable heterodimers in solution (Fig. A7). The association constants, Ka, in DMSO-d6 and in DMSO-d6/H2O (80/20, v/v) range from ~106 M-1 to ~104 M-1. Multivalency in the interactions is manifested by positive cooperativity, negative enthalpy of formation and sizeable negative entropy, in support of development of well ordered supramolecular structures in solution [19]. 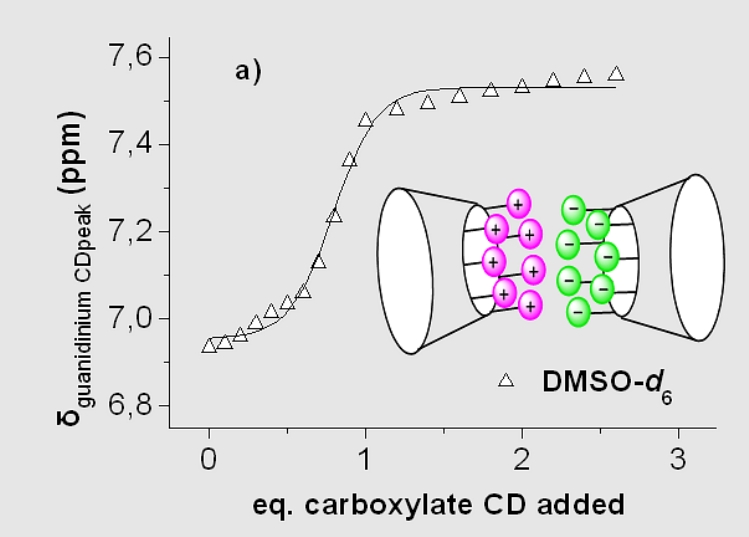 III.     Structural and recognition studies on inclusion complexes of cyclodextrins

Complexes with pheromones [20-27] and several plant growth factors [27, 28] have resulted in applications for the protection the olive tree by the controlled release of pheromones of the pests Bactrocera oleae and Prays oleae [29]. The induced fit exhibited by the cavities of permethylated α– and β–cyclodextrins that resulted in the resolution of the racemic mixture of Bactrocera oleae (Scheme A1 and Fig. A8) is very remarkable. [30-31].

Several inclusion complexes of drugs in native and derivatised Cds have been studied, such as the NSAID drug acemetacin in βCD [32], penicillin antibiotics (Fig. A9) with natural and carboxylated CDs [33], the antibacterial drug triclosan with native (Fig. A10) and positively and negatively charged CD derivatives [34] and the sulfonylurea hypoglycemic drugs tolbutamide (TBM), tolazamide (TLZ) and glimepiride (GLP), (Fig. A11) into βCD [35].

Fig A9. Ampicillin and the structure of ampicillin in per-6[S-carboxypropionic acid]-γCD (from NMR studies in aqueous solution).

Fig A10. The inclusion complex of the antibacterial agent triclosan in βCD forms dimers packing in channels. The dichlorophenyl ring of the guest enter the cavities of βCD dimers from their primary sides, whereas the hydrophilic chlorophenol ring extends in the space between dimers.

Fig A11. From Left to right the structures of the inclusion complexes of the hypoglycemic drugs TBM, TLZ and GLP in βCD. The mode of inclusion of the drugs is the same: the hydrophobic groups enter the cavities of two hosts, belonging to adjacent βCD dimers from the primary sides, whereas the hydrophilic sulfonylurea moiety is located between dimers, forming H-bonds with the hosts. The packing of the TBM, TLZ complexes is in channel mode, whereas in that of the GLP the βCD dimers are placed further apart (Intermediate mode) due to the increased length of the guest.

In contrast to the natural CDs which totally prefer to include the nucleobases of the nucleotides over their ribose rings, the guanidino CDs as well as other positively charged CDs happily encapsulate both ribose and deoxyribose rings in their cavity, whereas the nucleobase moieties are partially included. In several nucleotides studied (Figure A12), we showed that the phosphate groups play an indispensable role in provoking cavity binding through Coulomb interactions with the guanidino groups, as opposed to nucleosides that do not bind at all [36]. Inclusion of nucleotides in the moderately-sized guanidine-β-CD cavity enabled the observation of separate nucleotide conformers, attributed to slow ribose puckering rates. To our knowledge, this has not been reported before 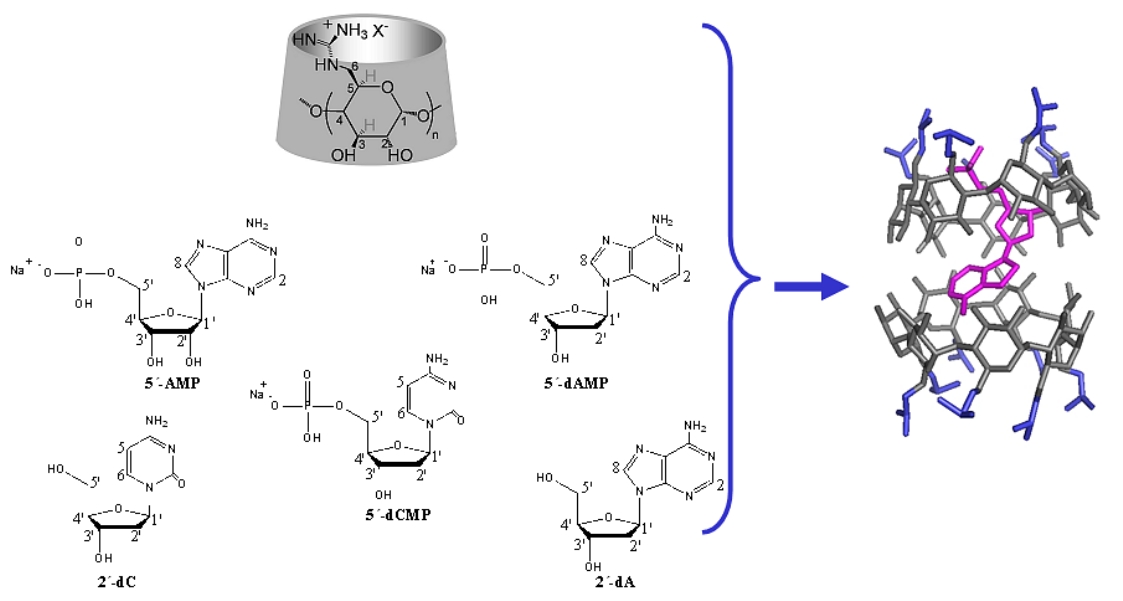 Figure A12. Binding of nucleotides to per(6-guanidino-6-deoxy)­cyclodextrins in aqueous solution